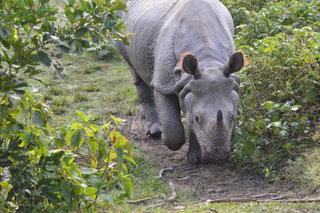 International tourism is often fraught with implications of colonial attitudes, cultural relativism and destruction of natural areas.  The burden of exponentially multiplying tourists on fragile environments can strain both local communities and ecosystems.  The Terai Arc Landscape of Nepal is one such area of international focus, a global hot-spot for biodiversity conservation as well as ecotourism. In 2016, Michelle undertook a study of a Colorado-based conservation group who purports to travel in what she calls a ‘relational approach.’  This approach involves using ecotourism as an instrument for building relationships with local conservationists in the Bardia and Chitwan National Park areas of Nepal.  Inviting civilians, veterinary personnel, zookeepers, conservationists and students to join them in educational trips abroad, ‘Team Nepalorado’ facilitates conversations with local leaders, conservationists and other stakeholders.  Through these conversations, local organizations can share their goals and needs, eventually gaining financial support from the US group.

This ‘relational’ method has been successful in promoting feelings of connectivity between Nepalese and American participants.  In one case, it resulted in a marriage between a female traveler and a Nepalese man.

American participants gained education about issues faced by marginalized communities, and many ended up financially supporting sustainable development initiatives such as honey collection from bees used in elephant mitigation trials (elephants in Africa have successfully been deterred via beehive fencing, but the same effects have not been realized in Nepal, as yet).  Team members donated funding or supplies for anti-poaching teams, educational programs and the first wildlife hospital in Nepal.  Team members felt that this type of travel allowed them to participate in ‘ethical’ tourism and build a larger, more global community.  Indeed, much of the support for quasi-governmental Nature Trust for Nature Conservation in Nepal comes from tourism dollars. The team is now actively supporting local conservationists in their efforts not only in Nepal, but in Costa Rica, Africa, and the US.

Ecotourism is not the panacea it might seem, however. Literature on the issues surrounding tourism in developing countries has much to add to this discussion.  There is concern regarding the commodification of both nature and non-human animals in areas where conservation and tourism intersect.  More research is needed on global ecotourism’s effect on carbon footprints, cultural impacts, and the treatment of non-human animals in touristic activities.  Following posts will address these issues as well as the complex situation surrounding captive elephants in Nepal.

Parts of the above research are out for publication.  Photos from 2016 can be viewed in the 2016 gallery section of this website.

The elephant dilemma is not really a dilemma at all: a scientific response to the Nepali Times